The President of the Italian Republic rewarded Giovanni Coletti

On Monday 5 February, in the Quirinale Palace, the President of Tama Aernova Giovanni Coletti received the award from the President of the Italian Republic Sergio Mattarella during the honors delivery ceremony given for citizens who have distinguished themselves for acts of heroism and civil commitment.

In particular, Coletti received the award as a civil example for his commitment within the social sphere and for its subsidy in building Casa Sebastiano, an avant-garde structure built in order to host and rehabilitate people affected by autism.

The speech of the President of the Republic Mattarella was very intense, some of his words were:

"This is a thank-you meeting, a special thank you from my side and our nation. This is the third year that we confer these particular honors to those who are active in the social sphere with heroism acts, courage and solidarity initiatives done in a spontaneous way and as a daily life choice [...]".

Giovanni Coletti excited said: "So much has been said during these last days, I was even recognized like an hero, but in my opinion heroes are those people who with altruism risk their lives in order to help the citizens: firemen, civil protection, rescuers... I will be very happy if I will be an example for someone so that could dedicate some time and commitment in order to help people having difficulties, especially families who there are individuals with disability that encounter serious problems every day".

The President of the Republic at the end of the official ceremony spoke some minutes with Coletti, asking for more information about Casa Sebastiano and promised to come to visit it next spring.

Many thanks from Coletti to all his collaborators, he underlines that the result he reached would not have been possible without all the volunteers, friends and employees of his company who contributed in realizing this project, working and dedicating some time to this beneficial initiative. Every goal, every award can be reached in a better way if people work in team. 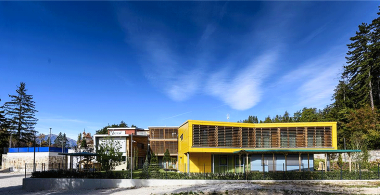 A school of thought by Tama Aernova 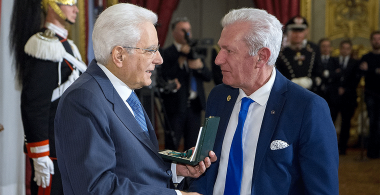 The President of the Italian Republic rewarded Giovanni Coletti