Oily mists: what they are and how to reduce them 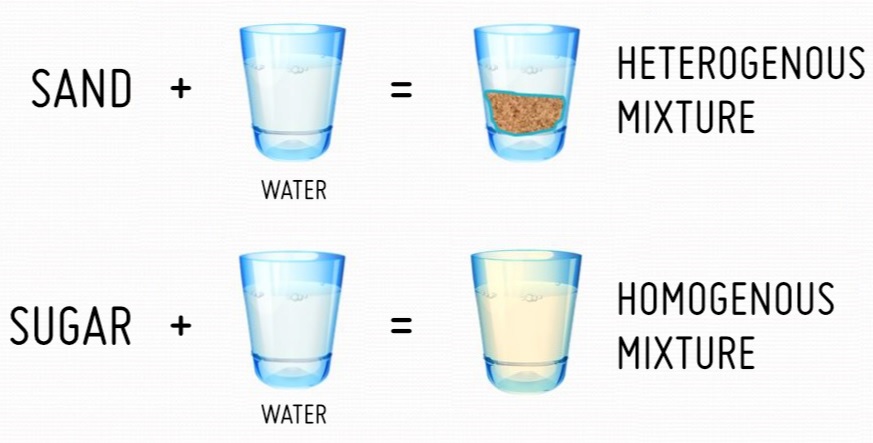 Oily mists, specifically, are a heterogeneous mixture and correspond to fine oily drops dispersed in the air.

How do oily mists generate?

Typically, oil mists form in processes that use lubricating oils or hydraulic oils. These types of substances, initially liquid, nebulize forming fine dispersions in the air. The nebulization takes place due to the increase in their temperature, as a result of the contact with hot surfaces or as a consequence of marked friction phenomena. If the oil present in the vapor phase then encounters colder areas there is a consequent tendency to condensation. Therefore, condensation nuclei will form in the gaseous phase, and will generate oily mists.

How to reduce them?

The abatement of oil mists occurs mainly in two ways and TAMA Aernova offers products for each of these:

The gas flow that is passed between the collecting plates is ionized, so the ions tend to move from the corona area towards the collecting electrodes. In this phase the produced ions collide with the contaminating particles in suspension and give them an electric charge (each particle can be charged by the action of more ions, until reaching high levels of charge). The charged powders are then attracted towards the collection electrodes where they are retained and subsequently removed. The main features of electrostatic filters are the high removal efficiencies (> 90%) even for very fine grain sizes.

Tama Aernova electrostatic filters Antares-E and Explorer-E operations are the following: the air suctioned by the fan located on the top of the filter turns the casing of the machine tool in a state of vacuum. The intake air full of oily pollutant passes through the drop separator where the "droplets" of oil present in the aeriform substance are blocked. Subsequently the air passes through a mechanical prefilter which has the function of spreading the air evenly before electrostatic filtration. Then, the air passes through the electrostatic filter which consists of an ionising section composed by overlapping sheets with "ionising" wires made of tungsten. The ionising wires are supplied with a voltage of 8.5 KV and are used to generate an electrostatic field to yield positive charges to the particles of the flow of polluted air. The electrostatically charged particles pass through the collecting section that consists of overlapping plates charged with a voltage of 4.5 KV and other interposed masses. The particles are then held in the collecting section with the "grounded” plates.

The TANDEM versions are fitted with a double electrostatic cell to improve the separation efficiency in the presence of high concentrations (greater than 40mg/Nm³). After the electrostatic filtration, the post-filtration avoids a repeated dragging effect caused by the absence of or inefficient maintenance. The versions with HEPA filter guarantee the best separation efficiency available.

What is coalescence? Coalescence is the physical phenomenon through which the particles of a substance unite to form ever larger particles. By taking advantage of this principle, for example, the oil drops can be “enlarged” to make them more easily eliminated from the gaseous stream. This principle is based on a physical quantity called interfacial tension, that expresses the energetic "cost" that must be spent to create a surface between two different phases. Since creating a separation surface is typically energy-intensive, the two different phases tend to minimize their contact surface, forming two separate masses.

The filters can exploit the coalescence through a surface that promotes the contact of dispersed oily drops, so as to facilitate this spontaneous phenomenon at the kinetic level. Once combined, these gravity drops tend to fall towards the lower part of the filter where they are then collected. The treated effluent is then aspirated by the fan and sent towards the expulsion chimney purified from these oily substances.

Operation of Tama Aernova coalescent filter Hyper-Oil: the air enters the filter group from above and is conveyed towards the bottom of the filter. In the tank it reverses the flow direction and continues upwards through the drop separator and then to the metal pre-filter. Then the flow passes through the external mat of the cartridge and through the cartridge itself. The filtered air will be conveyed by the exit of the filter cartridges towards the HEPA filtration module (if any). The suction fan (if any) will be located on top of the filter unit. A low pressure PULL JET system performs a continuous cleaning action draining the filtered oil towards the outside of the cartridge and of the mat. This technical principle allows the HYPER-OIL to be used for 24/7 operations. The pleated cellulose cartridge ensures a separation efficiency of more than 98% for particles with an average size of 2 microns. Subsequently, in the versions with HEPA post-filtration, the air passes through the H13 absolute filter then achieving a separation efficiency of 99.95 MPPS according to the EN 1822 standards. 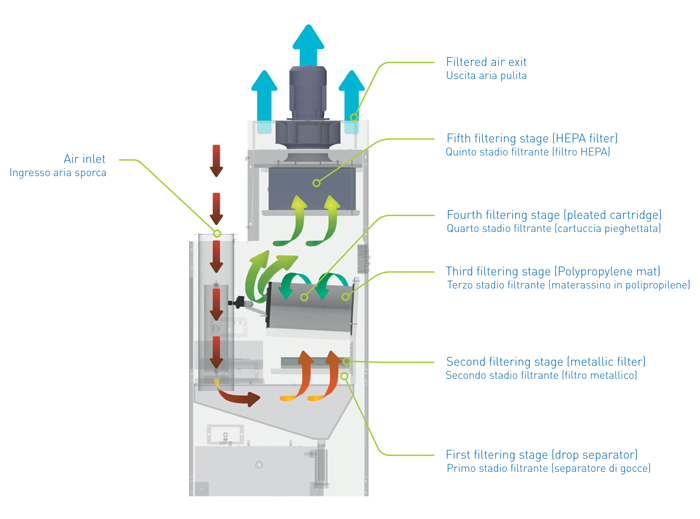 Discover all the Tama Aernova solutions for the reduction of oily mists and find the best system to satisfy your needs! 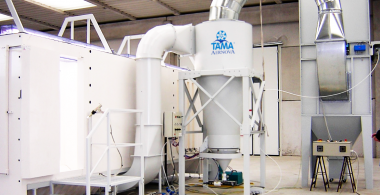 Powder Coating: How to get a Maximum Overspray Recovery? 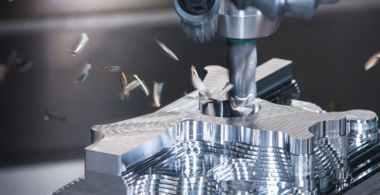 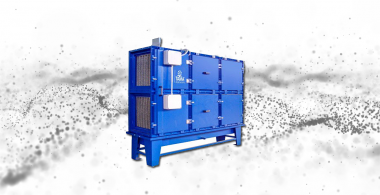