by Tama Aernova a concrete support to young athletes

After the great exploit of Turin 2006, in which curling was discovered by the big public of sports enthusiasts, it has returned to be talked about with great interest thanks to the results obtained in the recently concluded Beijing 2022 Olympic Games.

Contrary to what you might think it is not a new sport, curling is believed to have originated in Scotland in the Middle Ages and before landing permanently among the Olympic disciplines in 1998, it had already had a demonstrative presence in the 1924 Winter Olympics held in Chamonix, France, where the England team proved to be clearly superior.

Today, every time this sport is shown on television, the curling-mania breaks out and for a while there is a lot of talk about it, curling at the Olympics is a success story to which at Tama Aernova feel we have made a small contribution. Our roots that are divided between Piedmont and Trentino-Alto Adige, tell of a company that takes inside the culture of the mountains, its people, its traditions. This makes us supportive people, who not only live the territory contributing to its development as a productive economic entity but also as a reference point for the support of social and associative life of the areas in which we live and produce.

The meeting between Tama Aernova and curling took place a few years ago, when we met the Sporting Club Pinerolo and we decided to support the youth team, the sport nursery where tomorrow’s champions can grow. For us it is not, as often happens, an investment in the corporate image, we like the idea of being able to accompany these young athletes in the training path made of healthy competition and physical well-being. The cold of a winter sport such as curling melts away in the joys of victories and in the analysis of defeats and even if it does not seem, it is a discipline that requires temperament. Obviously only very few of the athletes we support can get to the Olympics but we like to think that we have given them all the opportunity to grow healthy and express themselves through a sport where talking and communicating is just as important as the athletic act of throwing the stone.

Modul Air, flexible, efficient and tailored accordingly to your needs. 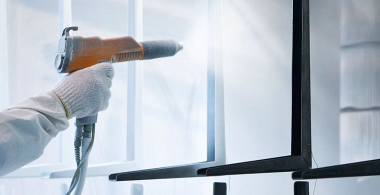